Nice
Over the Christmas, New Year period I traveled to Nice with my brother Andrew.

It’s not often I write a review about a city, but what is so special about the 5th largest city in France? 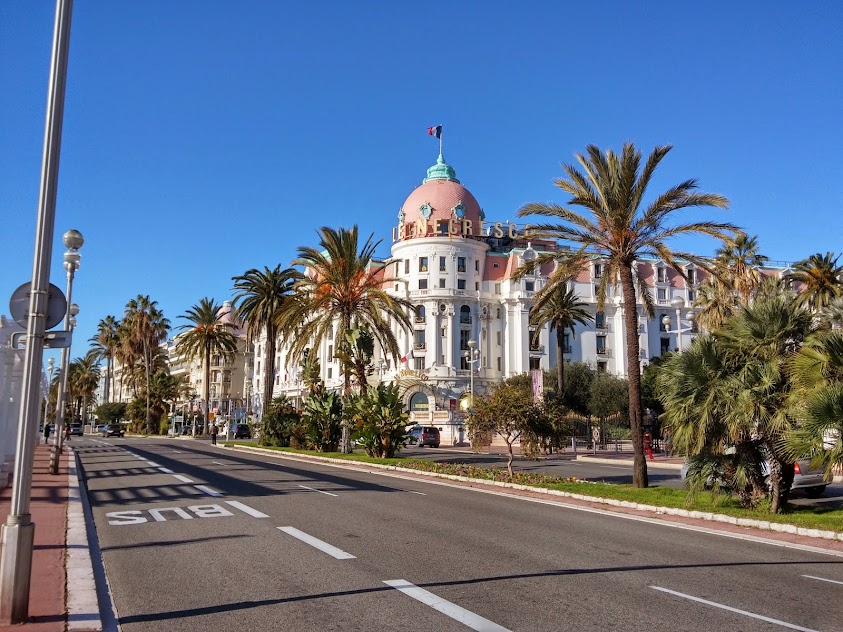 FIrst thing you might notice is how quiet is is here. It’s definitely not a bustling Paris or London. Having spoken to locals they all said that you can expect blue skies after blue skies during winter. Although the sun shines, you can expect a temperature of around 10-14 degrees Celsius during the day dropping to around 4degC overnight.

There were sunsets nearly everyday!

In a way, Nice is separated into 2 areas, the Old Town… and the new town. The Old town is a mesh of narrow roads to the south-east of the city. There’s also an old fort which gives you a perfect lookout over the city.

Nice has a few produce markets where the locals shop, one prominent market is located where the Old Town meets the beach. Located here are many restaurants (italian, seafood, etc) which seem like tourist traps but we ate at a few of them and they seemed alright. 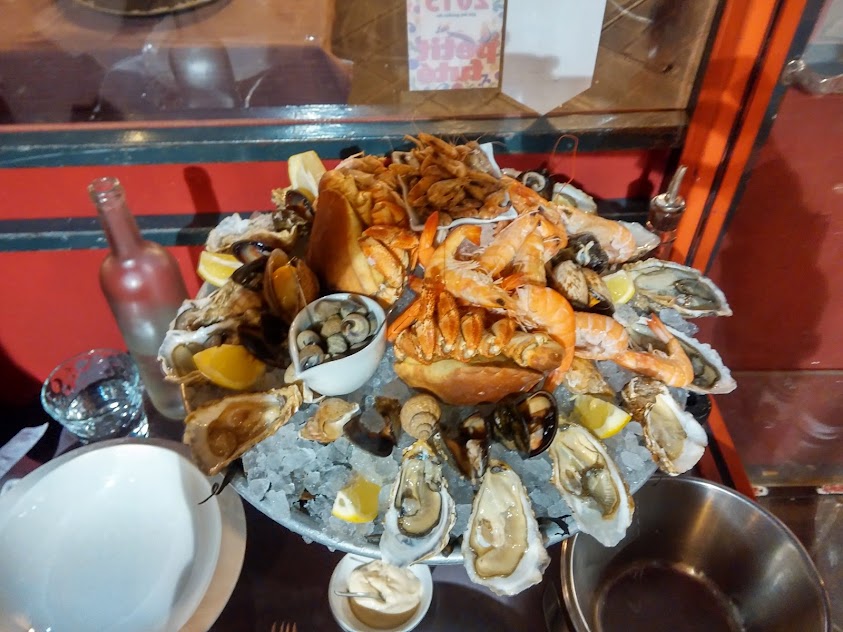 Once you’re done with that, go hire a ‘velobleu’ which is a rental bike service with docking stations all over Nice. At just 1 Euro a day, you can cycle all around! Enjoy exploring all the roads and along the beachfront.

If you’re up for more of an adventure, you can’t go past the Observatory! Nestled away in the hills, you can take the 84 bus to the top an enjoy more magnificent views over the city and see the stars at night. 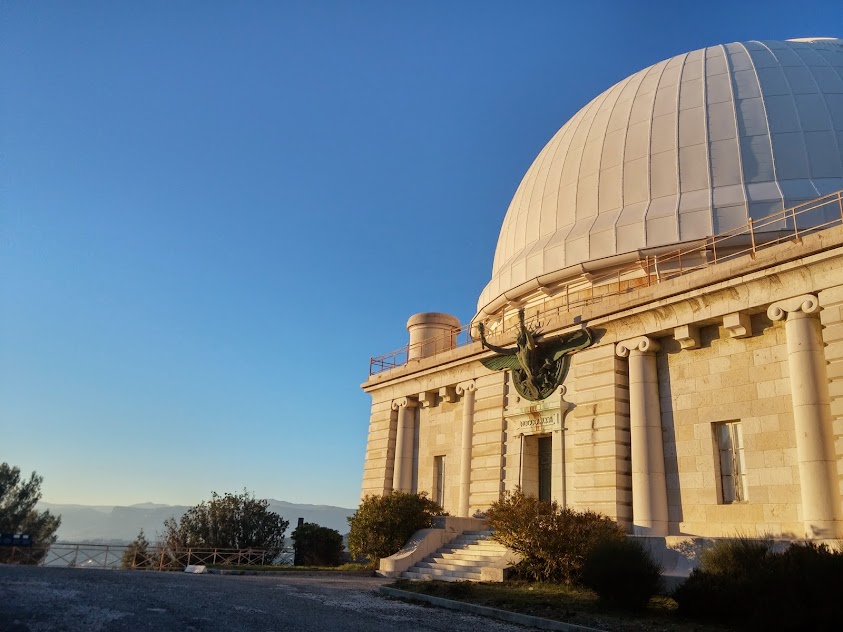 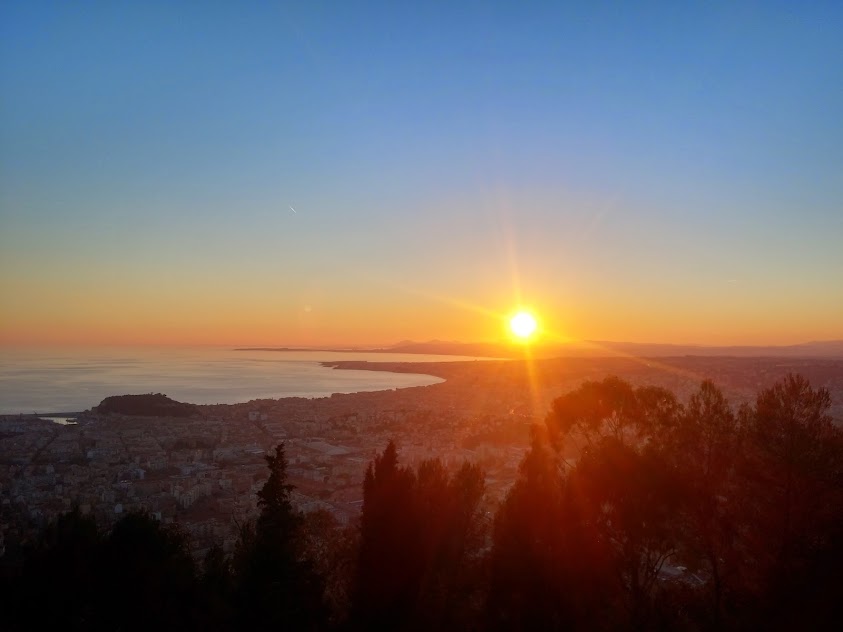 There is no official New Year party as such, if you’re after fireworks, you’ll be disappointed. Only Cannes and Monaco have midnight fireworks as they cater a lot more to the glitzorous and glamourous. Though don’t let it stop you from the midnight revelry that happens on the beach!

If you’re after a relaxing holiday with assured weather, goto Nice. If you have a few more days, check out Antibes, Cannes and Monaco, or even Menton which are only 20 minutes away by train

Antibes
An old fortification town, it’s often overlooked by the more famous Cannes and Monaco. However Antibes has a certain charm to is as if it doesn’t have to show off to shine.

Antibes has an old town too, it’s full of pasteries and baguette houses! 80 cents is all you need to bag yourself a fresh baguette! 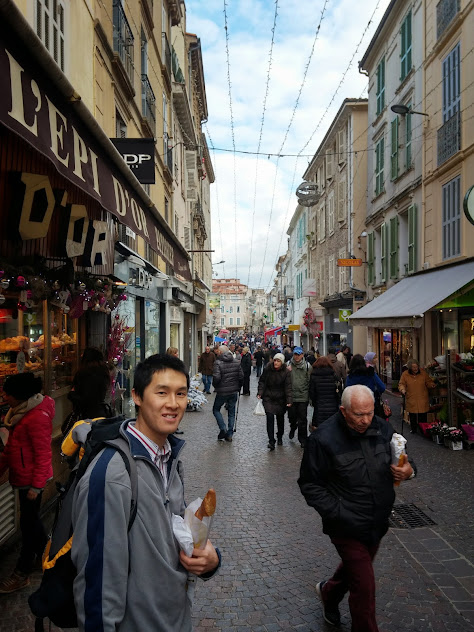 There is also a beautiful coastal walk you can do which takes you around the ‘Cape of Antibes’ around to the suburb of Juan les Pins. 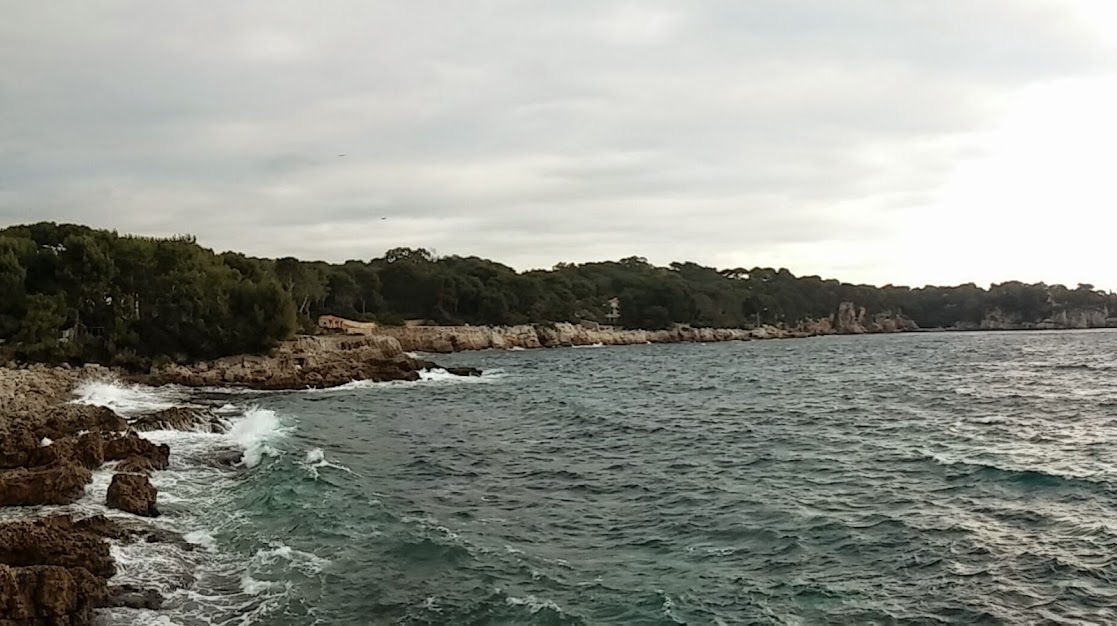 One thing that I noticed was that a lot of the foreshore and parks were surrounded by private property, getting access them may require you to climb fences! ‘Access Interdit’, ‘Chemin Prive’ etc are just all to common! Million euro mansions line the waterfront, and they’re quite nice to look at too. 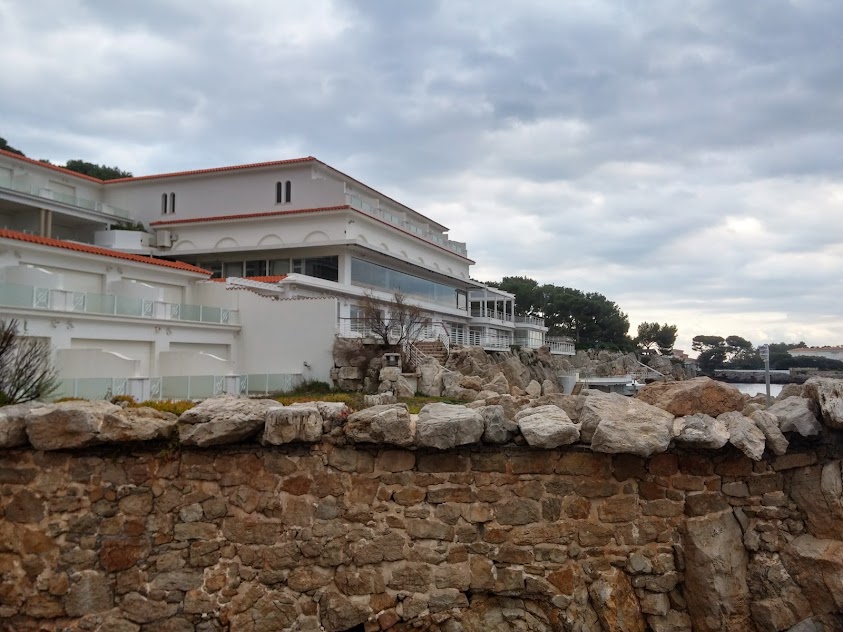 Monaco
Monaco is apparently one of the densest countries places in the world. Hard to imagine that as there are hardly any people walking the streets. However looking at the terrain, it’s somewhat easy to see why, stacks of apartment buildings splatter the mountain side. 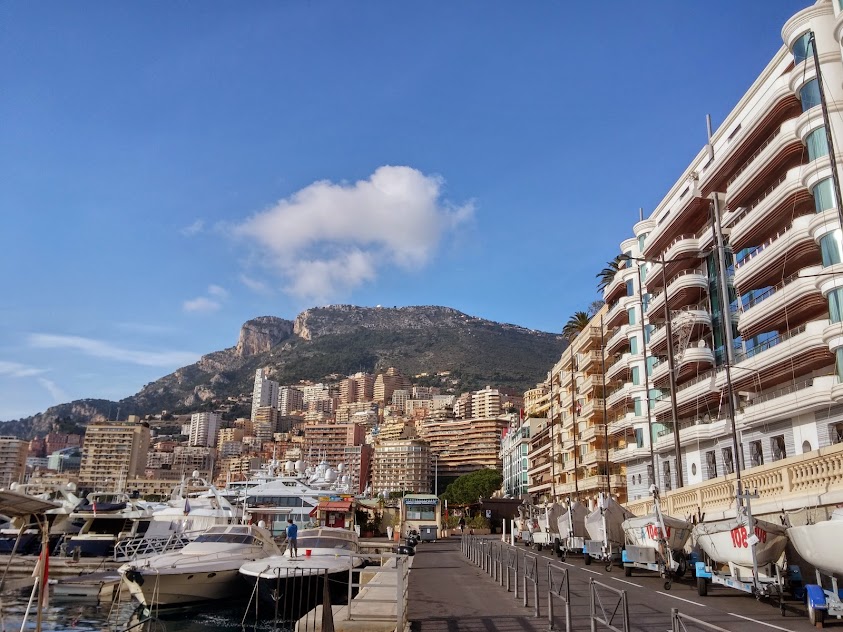 Monaco is accessible via bus, train and even cycling! If you are able to cycle, I highly recommend it. You get to enjoy the sights. It’s a little hilly and a one way trip is around 2 hours.

You’ve all heard about it… the Grand Prix, now you can walk the track! It’s nearly exactly how it looks on TV. The hairpin, the Casino, the uphill bit, the tunnel!! WOW!

Even if you’re not a motorhead, you can still admire the F1 drivers racing through the narrow roads and limited overtaking spots. 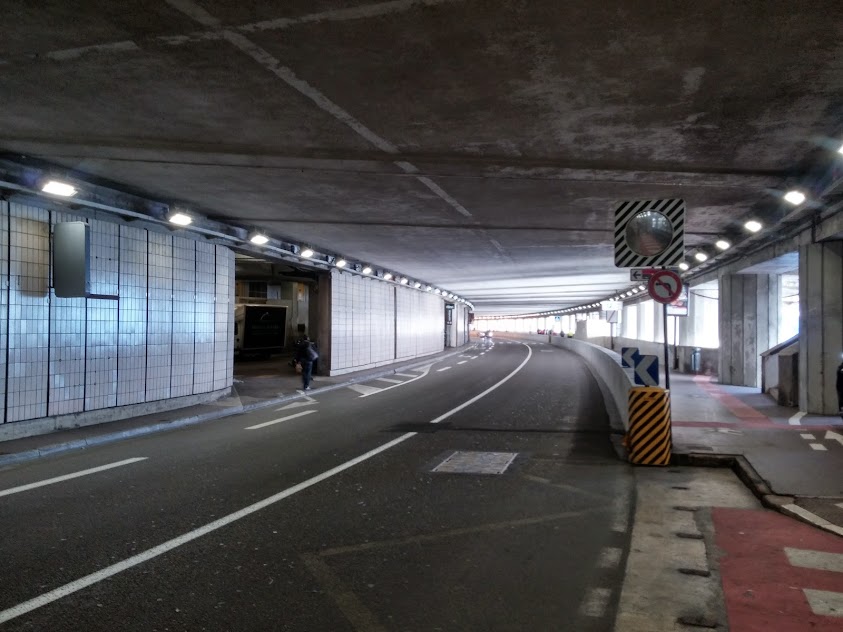 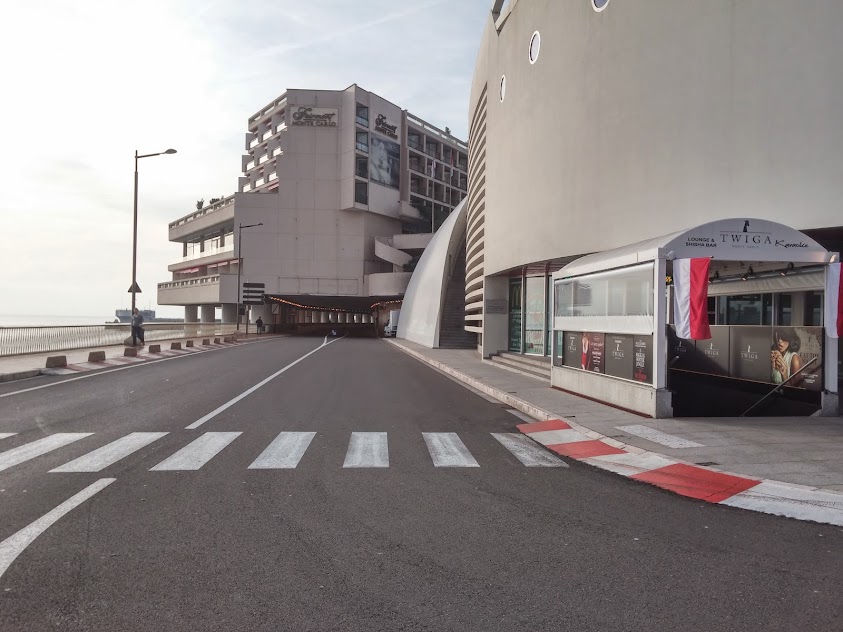 While you’re in Monaco, you don’t have to catch the changing of the guard at 11:55am like everyone will tell you, it’s not that impressive… Just a few soldiers shouting and moving their arms and guns around… enjoy the views instead! The entire palace area has a large garden which is paid for by the income from the casino!

Now about that MonteCarlo casino. It’s shit. It really is, even Christchurch Casino is better. Sky City in Auckland mops the floor with Monte Carlo casino. Yeah that’s right. First of all, there’s a 10euro entry fee, and inside there are only 5 tables (1 craps, blackjack, roulette), and around 30-40 pokie machines.

Now if you think you’ve seen it all, quickly get the No.2 bus to the Jardin Exotique, it may seem like a pricey succulents park showcasing cacti, but venture further in the caves… tours are around every half hour and you go about 50 metres down into a really old cave.

The place smells of money, ferraris and luxury and sporty cars! So lap it up.

Cannes
If you still have time, check out Cannes, which is famous for the Cannes Film Festival. 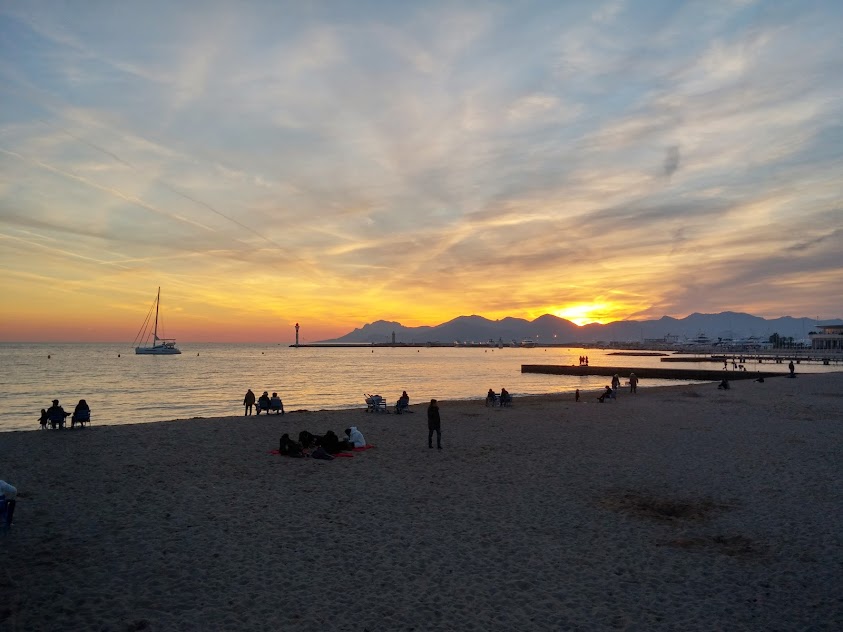 Cannes isn’t too bad, it has a great sunset too.

Cannes has a nice view at the top of the Museum.

There isn’t much of an old town in Cannes… and I’d probably rate it the lowest out of the above places.

Summary
Yes this place is summery even in winter! Bucket of beaches, scenic sunsets and blitzing blue skies. The French riviera is a great place to visit during winter!